Get the latest Nmap for your system:

Older versions (and sometimes newer test releases) are available from the Nmap release archive (and really old ones are in dist-old). For the more security-paranoid (smart) users, GPG detached signatures and SHA-1 hashes for each release are available in the sigs directory (verification instructions). Before downloading, be sure to read the relevant sections for your platform from the Nmap Install Guide. The most important changes (features, bugfixes, etc) in each Nmap version are described in the Changelog. Using Nmap is covered in the Reference Guide, and don't forget to read the other available documentation, particularly the official book Nmap Network Scanning!

Nmap users are encouraged to subscribe to the Nmap-hackers mailing list. It is a low volume (7 posts in 2015), moderated list for the most important announcements about Nmap, Insecure.org, and related projects. You can join the 128,953 current subscribers (as of September 2017) by submitting your email address here:

Nmap is distributed with source code under custom license terms similar to (and derived from) the GNU General Public License, as noted in the copyright page. 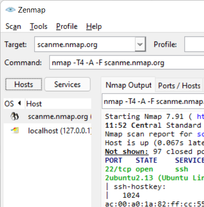 Please read the Windows section of the Install Guide for limitations and installation instructions for the Windows version of Nmap. It's provided as an executable self-installer which includes Nmap's dependencies and the Zenmap GUI. We support Nmap on Windows 7 and newer, as well as Windows Server 2008 R2 and newer. We also maintain a guide for users who must run Nmap on earlier Windows releases..


We have written post-install usage instructions. Please notify us if you encounter any problems or have suggestions for the installer.

Many popular Linux distributions (Redhat, Mandrake, Suse, etc) use the RPM package management system for quick and easy binary package installation. We have written a detailed guide to installing our RPM packages, though these simple commands usually do the trick:

You can also download and install the RPMs yourself:

Nmap binaries for Apple macOS (x86-64) are distributed as a disk image file containing an installer. The installer allows installing Nmap, Zenmap, Ncat, and Ndiff. The programs have been tested on Mac OS X 10.9 and later. See the Mac OS X Nmap install page for more details. Users of PowerPC (PPC) Mac machines, which Apple ceased selling in 2006, should see this page instead for support information.

This is the traditional compile-it-yourself format. The Nmap tarball compiles under Linux, Mac OS X, Windows, and many UNIX platforms (Solaris, Free/Net/OpenBSD, etc.) It includes Zenmap, the GUI frontend.

Detailed Linux/BSD/Solaris compilation instructions and options are provided here, though this usually does the trick:

If you are compiling Nmap anyway, you might prefer to get the very latest code from our SVN source code repository rather than downloading a tarball here.

Many other operating systems support Nmap so well that I have no need to create and distribute binary packages myself. You can choose to use the packages below, or compile the source distribution, which is often newer. We have created installation pages for the following platforms: