July 16, 2009 -- Insecure.Org is pleased to announce the immediate, free availability of the Nmap Security Scanner version 5.00 from https://nmap.org/. This is the first stable release since 4.76 (last September), and the first major release since the 4.50 release in 2007. Dozens of development releases led up to this.

Considering all the changes, we consider this the most important Nmap release since 1997, and we recommend that all current users upgrade.

Nmap ("Network Mapper") is a free and open source (license) utility for network exploration or security auditing. Many systems and network administrators also find it useful for tasks such as network inventory, managing service upgrade schedules, and monitoring host or service uptime. Nmap uses raw IP packets in novel ways to determine what hosts are available on the network, what services (application name and version) those hosts are offering, what operating systems (and OS versions) they are running, what type of packet filters/firewalls are in use, and dozens of other characteristics. It was designed to rapidly scan large networks, but works fine against single hosts. Nmap runs on all major computer operating systems, and official binary packages are available for Linux, Windows, and Mac OS X. In addition to the classic command-line Nmap executable, the Nmap suite includes an advanced GUI and results viewer (Zenmap), a flexible data transfer, redirection, and debugging tool (Ncat), and a utility for comparing scan results (Ndiff).

Nmap was named “Security Product of the Year” by Linux Journal, Info World, LinuxQuestions.Org, and Codetalker Digest. It was even featured in eight movies, including The Matrix Reloaded, Die Hard 4, and The Bourne Ultimatum.

As free software, we don't have any sort of advertising budget. So please spread the word that Nmap 5.00 is now available!

Before we go into the detailed changes, here are the top 5 improvements in Nmap 5:

Please mail Fyodor if you see (or write) reviews/articles on the Nmap 5.00 release. Here are the ones seen so far: Reasonably detailed (or with many comments) English articles:

Journalists (anyone writing about the Nmap release) are welcome to use any of the text or screen shots on this page.

Nmap 5.00 provides a wealth of information about remote systems, as shown in this sample scan:

Here are some Nmap and Zenmap 5.00 screen shots (click thumbnails for full resolution):

The Nmap Changelog describes nearly 600 significant improvements since our last major release (4.50). Here are the highlights:

The Nmap Scripting Engine (NSE) is one of Nmap's most powerful and flexible features. It allows users to write (and share) simple scripts to automate a wide variety of networking tasks. Those scripts are then executed in parallel with the speed and efficiency you expect from Nmap. It existed in Nmap 4.50, but has been dramatically improved:

Zenmap is a cross-platform (Linux, Windows, Mac OS X, etc.) Nmap GUI and results viewer which supports all Nmap options. It aims to make Nmap easy for beginners to use while providing advanced features for experienced Nmap users. Frequently used scans can be saved as profiles to make them easy to run repeatedly. A command creator allows interactive creation of Nmap command lines. Scan results can be saved and viewed later. Saved scan results can be compared with one another to see how they differ. The results of recent scans are stored in a searchable database. While Zenmap already existed in Nmap 4.50, it has improved dramatically since then:

Nmap 5 introduces Ncat, a general-purpose command-line tool for reading, writing, redirecting, and encrypting data across a network. It aims to be your network Swiss Army knife, handling a wide variety of security testing and administration tasks. Ncat is suitable for interactive use or as a network-connected back end for other tools. Ncat can:

These capabilities become even more powerful and versatile when combined.

Ncat is our modern reinvention of the venerable Netcat (nc) tool released by Hobbit in 1996. While Ncat is similar to Netcat in spirit, they don't share any source code. Instead, Ncat makes use of Nmap's well optimized and tested networking libraries. Compatibility with the original Netcat and some well known variants is maintained where it doesn't conflict with Ncat's enhancements or cause usability problems. Ncat adds many capabilities not found in Hobbit's original nc, including SSL support, proxy connections, IPv6, and connection brokering. The original nc contained a simple port scanner, but we omitted that from Ncat because we have a preferred tool for that function.

Ncat is extensively documented in its Users' Guide, man page, and home page.

Nmap has been doing host discovery and port scanning since its release in '97, but we continue to improve this core functionality. We've added many new features and dramatically improved performance! Here are the biggest enhancements since 4.50: 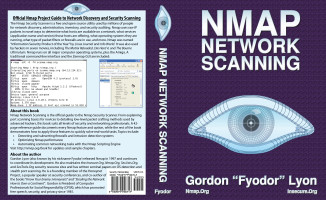 Fyodor released Nmap Network Scanning: The Official Nmap Project Guide to Network Discovery and Security Scanning. From explaining port scanning basics for novices to detailing low-level packet crafting methods used by advanced hackers, this book suits all levels of security and networking professionals. A 42-page reference guide documents every Nmap feature and option, while the rest of the book demonstrates how to apply those features to quickly solve real-world tasks. It was briefly the #1 selling computer book on Amazon. More than half of the book is already free online.

A German translation is available from Open Source Press; Korean and Brazilian Portuguese translations are forthcoming.

Thanks to fingerprint submissions from thousands of Nmap users around the world, the 2nd generation OS detection database has nearly doubled in size since 4.50 to 2,003 entries. These include the latest versions of Windows, Linux, and Mac OS X as well as more specialized entries such as oscilloscopes, ATM machines, employee timeclocks, DVRs, game consoles, and much more. Keep those submissions coming!

In addition to doubling the database size, we enhanced the OS detection engine and its tests to improve accuracy. For example, we added a new SEQ.CI test (IP ID sequence generation from closed TCP port) and removed the U1.RUL, U1.TOS, IE.DLI, IE.SI, and IE.TOSI tests.

Nmap's version detection system interrogates open ports to determine what service (e.g. http, smtp) is running and often the exact application name and version number. The version detection database grew by nearly a thousand signatures. It grew from 4,558 signatures representing 449 protocols in Nmap 4.50 to 5,512 signatures for 511 protocols in 5.00. You can read about Doug's signature creation adventures here, here, and here. The service protocols with the most signatures are http (1,868), telnet (584), ftp (506), smtp (363), pop3 (209), http-proxy (136), ssh (123), imap (122), and irc (48). Among the protocols with just one signature are netrek, gopher-proxy, ncat-chat, and metasploit.

The new Ndiff utility compares the results of two Nmap scans and describes the new/removed hosts, newly open/closed ports, changed operating systems, or application versions, etc. This makes it trivial to scan your networks on a regular basis and create a report (XML or text format) on all the changes. See the Ndiff man page and home page for more information. Ndiff is included in our binary packages and built by default, though you can prevent it from being built by specifying the --without-ndiff configure flag.

Here are excerpts from an Ndiff comparison between two scans for the Facebook network:

And here is a trivial cron script demonstrating how easy it is to scan a network daily and mail yourself the changes (and full results in this case):

You could do a similar thing using Windows' scheduled tasks.

IronGeek has created an Ndiff 5 introductory video demonstrating command-line Ndiff plus its use within Zenmap.

While Nmap Network Scanning may be the most exciting documentation news for this release, we did make many other important web site and documentation changes:

Nmap's dramatic improvements are of little value if it doesn't run on your system. Fortunately, portability has always been a high priority. Nmap 5.00 runs on all major operating systems, plus the Amiga. Portability improvements in this release include:

These are just highlights from the full list of changes you can find in our CHANGELOG.

With this stable version out of the way, we are diving headfirst into the next development cycle. Many exciting features are in the queue, including:

You can read more of our short-term and longer-term plans from our public TODO list.

For the latest Insecure.Org and Nmap announcements, join the 68,000-member Nmap-hackers announcement list. Traffic rarely exceeds one message per month. subscribe here or read the archives at SecLists.Org. To participate in Nmap development, join the (high traffic) nmap-dev list. You can also follow us on Twitter.

A free open source scanner as powerful as Nmap is only possible thanks to the help of hundreds of developers and other contributors. We would like to acknowledge and thank the many people who contributed ideas and/or code since Nmap 4.50. Special thanks go out to:

We would also like to thank the thousands of people who have submitted OS and service/version fingerprints, as well as everyone who has found and reported bugs or suggested features.

Nmap is available for download from https://nmap.org/download.html in source and binary form. Nmap is free, open source software (license).

To learn about Nmap announcements as they happen, subscribe to nmap-hackers! It is a very low volume (7 messages in 2008), moderated list for announcements about Nmap, Insecure.org, and related projects. You can join the 65,000 current subscribers by submitting your e-mail address here:

Nmap-hackers is archived at Seclists.org and has an RSS feed. You can also follow the Nmap Twitter feed.

Brandon Enright and UCSD have generously mirrored the Nmap binaries to handle the deluge of traffic expected as users download this release.

Direct questions or comments to Fyodor (fyodor@nmap.org) . Report any bugs as described here.